The lone ranger wears a mask.

He came out of retirement, put aside his silver sneaker gym membership. Instead of riding a horse named Silver, he has silver at his temples, his thinning hair covered by a surgical shower cap.

He has wire-rimmed glasses and a square jaw which can only hide so much behind his mask.

His uniform of sorts is bleached out cavalry blue, they call it a scrub top, really a paper gown that wafts in the breeze, who knows if that’s from the ventilators or patients’ exhalations–sick and gasping coughs–what they used to call a death rattle.

The lone ranger is not afraid of death rattles or rattle snakes.

His big guns are antibiotics and they fly through the enemy like a ghost.

Still, the lone ranger looks the danger right in the eye, through his grimy protective shield.

Though the cactus spines bite into his ass, he keeps riding forward on his own horse, which is really his own two legs.

He keeps riding forward without his silver sneakers toward the edge of the cliff. 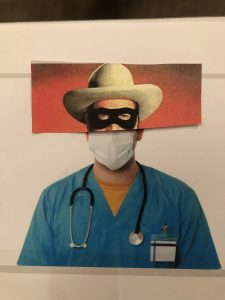