I’m in transition, changing locations during an important part of my life. It’s between jobs. Between education. Between states. Things are closing and things are opening. Society is changing and I can’t keep up with it.  In the beginning I have to give up my housing and suddenly I’m in a new dormitory, an apartment of sorts and my old bedroom is taken over by two kids with a very large sound system, one of those things with a rack of amplifiers and tuners and giant speakers.

I feel like I should get close to these guys, kiss up to them a bit even though they’re young and crazy–probably only around eighteen, because you should be friends with the people next-door, especially those with powerful sound systems, but instead, my instinct is still to isolate, so I retreat into the bathroom. That’s when I realize that the room on the other side of the bathroom is also occupied by young women who sublet the other bedroom in my apartment.

All I have is the bathroom to stand in, no bedroom. I’m reluctant to go back in with the eighteen-year-olds. On the other side of the bathroom, the women subletters are already asleep, which means I can’t get my clothing for bed. I don’t have a bed anyway. I’m basically stuck in a bathroom with no other place to live.

The next day out on the street it feels Floridian, a bit industrial. I think it might be Jacksonville. There are all kinds of activities going on and I feel as if I’m supposed to join in, but first I walk around trying to get my orientation in this strange new city.

Near the water they have these semi-tropical trees with long and wide leaves. I walk along a boardwalk, more of a path along the water, until the trail meanders back into the center of the city and soon I’m with a bunch of other people watching a festival of sorts, mostly athletes  participating in all kinds of competitions: running races, cycling, triathlons, all the events that were canceled, now occurring simultaneously in this southern city reopened for business and pleasure, all the social, physical activities people wanted to do for so long but couldn’t.

I stand along the side of the highway waiting for some of the cyclists to pass, but there are mostly cars, I presume people trying to get back to work. I see one cyclist pull up to adjust his tire. It’s not clear which event he’s competing in. It all seems kind of haphazard, disorganized. Maybe this is what happens when too many things re-open simultaneously.

It’s important to make friends when you’re in a new city, so I join a group headed somewhere to watch an event and ask if I can first stop and get some lunch. They seem a bit irritated but agree. Close by, I see a sign for a noodle store that seems fun and quick. When I get into the store it’s not a noodle store, but a small deli. A tall guy with a semi-shaved head greets me from behind the counter.

“Where’s the noodle store?” I ask.

He dismisses me with a roll of his tired eyes. “Why don’t you just go outside to the three noodle stores directly next-door and give them all your business.”

I nod with a polite smile and head out, but he calls after me.

“Every time people ask where’s the noodle store–it’s like they’re castrating me. You know, shaving my balls–right before they do the good deed.”

So I buy two bottles of water one for me and one for my new friend. Large bottles. Uncarbonated.

We forget about the noodle store, instead head towards the island where they have the competitions and on the way, see cars and cycles spiraling down this treacherous steep road, which takes us to the water’s edge.

It’s warm and there’s a soft off-shore breeze. We learn about the water component of the competition, which is to swim to a raft-like island in the distance with all sorts of swings and slides; giant structures you climb on from the water, enticing everyone like a beacon, an overdue celebration after a long, unbearable hibernation.

But the swim seems far, and people are so out of shape. I wonder about the strong current. I wonder if people will drown on the way. It might look like fun, but many of us may not make it across such a great distance to finally frolic in the sun. 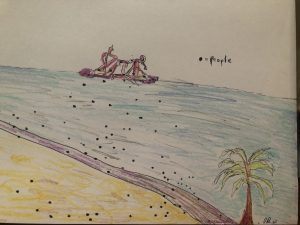