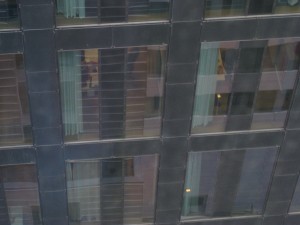 I dream of being a hostage in an office building in Sweden.

The Swedes take us in. They seem to accept everyone in their open society where work sets you free.

Inside, on the floor of my office is a lone terrorist.

I’m not sure if you can call him that, but he’s a single, solitary and troubled soul, slightly dark-skinned, maybe Sudanese–with a pustular face.

The office seems more locker room than workspace, with its industrial carpet and wooden cubbies. There’s florescent lighting and an abundance of sliding doors and partitions that could just as easily separate urinals as it might work cubicles.

“You know,” says a co-worker, “once there’s a hostage situation, there’s always the risk that some or all of us will be killed.”

I slide through rooms, opening and closing doors.

Until I stumble upon him.

I have enough common sense to make him feel included. I know I’m one of those rare individuals—smart enough to outsmart a terrorist.

He bends forward, the shadows masking his face, but it’s light enough to see he’s not carrying a gun.

“He’s part of the team!” I yell with my least menacing voice. “He means no harm! He’s a good man!”

For the moment he remains quite still. I assume my plan is working.

But just as suddenly he rushes at me–from the long, opposite end of the industrial corridor.

I have time to run.

So much time–but suddenly I’m old and infirm and I’ve lost the motivation to retreat.

It’s not that I want to stand up to this man, but I’m gripped more with apathy than fear.

He runs at me and I do nothing.

He doesn’t shoot or stab.

He doesn’t blow himself up.

A form of pepper, seemingly designed to inflict maximal damage–sings out from its pressurized canister with both a laugh and a prayer.

I feel the powder rise.

Fumes ascend, a mercurial concoction of paprika and cayenne–dusty and red to provoke fear.

It may not burn much, but I close my tearing eyes with anticipation and think of my father—of making him cry many years ago.

As a practical joke I ambushed him with sneezing powder and in the few seconds before he choked, his face crumpled with disbelief transforming him from the father I knew and loved into an abandoned child I refused to recognize.

The man in front of me is not my son, but I’m alive and with my heart pounding out of my chest—laden with the fear of blindness and the inevitable spasm of my airways, I know its time to retreat, to follow the contours of the room–from the office space I’ve long since committed to memory.

I withdraw from the isolated figure of that despicable man, loathed by others for his cowardly act; an escape from a grievously desperate soul, who reminds me–of myself. 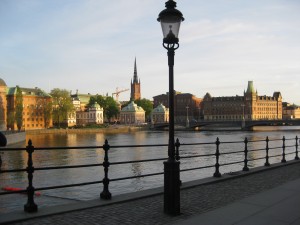 ← How We Relate to the World Poetry: A Crumb of Smith and a Taste of Paz →