It takes place in another life, perhaps in one of those camps, maybe even a boarding school.

When I first leave the museum, I can see the the ski slopes and a majestic sunset.

This is Buffalo and Brooklyn combined and I’m living next to a train station.

some downhill before dark.

It’s all part of my addiction–a craving for alpine induced endorphins.

I just need to get there, but soon it’s fairly obvious–it’s not going to happen.

First, I’m interrupted along the way by a lot of people I don’t have much patience for. Regardless, I’m obliged to stop and talk.

“You need to come to our party,” they keep saying.

A brunette woman seems familiar; thin and fairly attractive. I must have known her from

“I saw you in this movie,” she says. “You played a really happy character–you know, like laughing a lot. It was a short part, but you were really good.”

A short part. Apparently, so short I can’t recall it. But she mentions three or four other movies I’ve appeared in. I remember zilch.

My guess is that someone’s following me around filming me.

I may appear surreptitiously in a bunch of films, but I can’t get anything else done. I”m in danger of missing both the party and the skiing.

I can’t even find the train station. So I run out onto the streets of Brookalo, in the middle of traffic with its wet slush and out of service taxi cabs and finally I see these two guys in official train uniforms and ski patrol jackets. One wears a party hat, the other’s carrying a balloon.

“Which train do I take to the party?” I ask. “And where do I transfer to make it to the mountain?”

But they ignore me and won’t stop speaking about broken vending machines.

I need to interrupt them, to fulfill my obligations and finally go skiing–to feel high in the wind, so the day won’t be wasted. 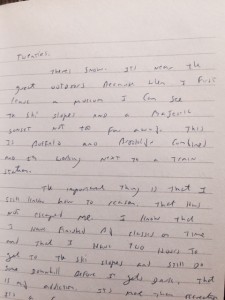 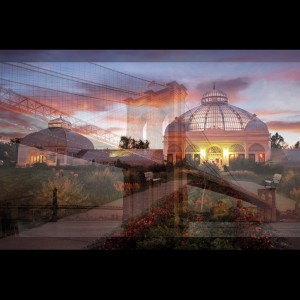