I found this paper tucked into my copy of “Notes From A Chairmen.”

You may not realize it, but this book is our bible. 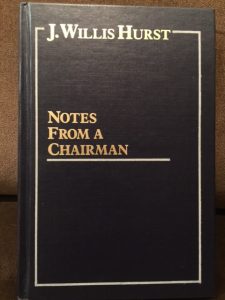 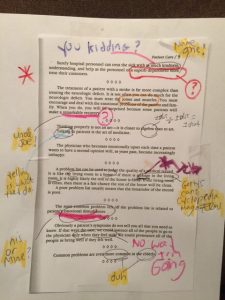 I suspect this is the work of a young house officer, a medical resident at our institution. He also was a patient and obviously has some very serious psychological issues. He’s been bitter ever since a relative of his suffered a serious stroke. The relative did quite well and was discharged to rehab, however the young doctor had unrealistic expectations.

We believe he’s severely bipolar with lapses of psychotic depression. He stopped taking his lithium and is certainly not receiving the proper treatment.

His analytical and problem solving skills have deteriorated though some believe he’s a gifted writer. This is what he typed into the last medical record:

“HISTORY OF PRESENT ILLNESS: The Chairman taught me to dream. He taught me to speak in my sleep and threaten my patients’ enemies with toxic profanity between flattened breaths.”

“PAST MEDICAL HISTORY: The treatment room lights remind me of the gentle sway in a woman’s thighs; contours of the hips I used to writhe against.”

Health department authorities have been called to investigate hazardous conditions in his home. Some believe he’s a hoarder.

The last time I saw this resident in the Emergency Department he was suturing someone, pretending he was “gift wrapping.”

Following this episode, he was sent to my clinic and I examined him. I made the above diagnoses and referred him to psychiatry but now he wants a second opinion.

The Chairmen, agrees he’s entitled to a second opinion, but I see this as a waste of time. The Chairman states that “the resident’s symptoms tell us everything we need to know. The reason he refuses to report himself as ill is because he doesn’t feel sick. Since he feels well, we have to assume (as his colleagues) that there’s nothing wrong with him.”