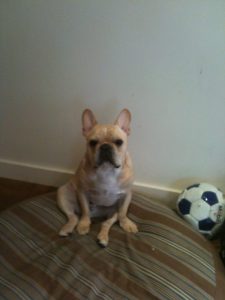 Sweltering through Columbia, South Carolina humidity, I seek the refuge of a river to view the waning sun. I want to morph with nature. I want to taste the evening coolness roll in with the crickets and feel the birds disperse with the anomalous twist on sunrise and sunset, dialed up on fast-forward. I come to watch the eclipse.

Only hours before I learn of the sudden loss of our family companion, my 80-year-old adopted son, really a permanent three-year-old. Bob, our beloved French bulldog, died suddenly in his sleep back home in New York city only hours before the rising sun—the rising sun that I’ve left home to see blocked.

My eclipse glasses are ready, but now I know that through them I will see something more: the disappearance and re-emergence of the sun will provide a microcosm of the fleeting moments of life itself.

As if the French Bulldog is a cruel lab experiment, it seems that Bob shouldn’t have existed in the first place. I was told because of their crazy hips and pelvic proportions they were prone to ineffective mating, pregnancy depending upon artificial insemination. Unable to push out their pups, they required C-sections for birthing. Bob had such bad skin allergies, the only product able to stop his itching was cyclosporine, the same medication humans use to suppress the immune system for kidney transplants. He had an abundance of skin and soft tissue cancers over the years, necessitating shaving and biopsies and of course more itching when his hair grew back. Half of one ear was chopped off in middle age to allow him recovery from a mast cell tumor, so he pranced around the upper east side like a crazed Frenchie Van Gogh stubbornly guiding me to his Arles—Central Park. He had steps up to our bed and scurried over me at three am to position himself between my wife and I for an eternal night of being pushed back and forth so we could manage short reprieves from his inevitable snoring.

I loved the comforting dog scent on his head, the sweet cake smell of the yeast in his facial skin folds, his paws that smelled like buttered popcorn. He was thirty pounds of squat and solid muscle with a small head and a giant jaw like a tyrannosaurus chiseled onto a teddy bear. He was hand fed but tough and rough and wild. He had vicious tugs of war with his favorite Boxer friend until he injured a disc in his neck resulting in permanent leg and paw weakness, but he always seemed happy and fun.

In his later years he refused to leave home unless I carried him, necessitating the use of a doggie stroller, yet he was somehow always well enough to trot back home. Of course, if I yelled the magic words, “Bob, let’s go to Central Park,” or “Dog Run!” he sprinted out of the house like a crazed puppy. In other words, he played us like a champ.

Bob was a character, a kind of neighborhood icon, with more Instagram followers than I could have aspired for (@ForlornFrenchie). Friends with the bouncers at bars, he sprawled out on the welcome mats to gain belly scratches from the patrons lining up to get carded. He intimidated large dogs and ignored the small ones. A beloved second son, he chugged along for eleven and a half years despite his assortment of ridiculous medical problems.

The original idea for a family dog began after our son, an only child, asked for a sibling.

“You can’t pick out a sister or a brother, but you can pick out your dog,” he was told and weeks later he eyed the predecessor of his future “sibling,” on a city street corner, and quickly copped the name of the breeder.

A rescue dog always seems to be the best choice, mixed breads healthier and sadly more desperate for a home, but we held up our end of the bargain and within weeks we were learning about the young fawn Frenchie with “the black birthmark behind his ear,” awaiting to mature enough so we could swipe him from the south.

We were greeted by the smiling breeder, Carolyn at her home in Cowpens, South Carolina and a barking French bulldog perhaps two years old that jumped like a deranged and hacking kangaroo.

“This is what you’re going to have to put up with for the next ten years,” my buddy Larry laughed into my ear.

“That’s his best friend, Zoey,” said Carolyn and she lifted up a miniature toy fellow in a tee shirt, quiet and curious: Bob.

“He’s adorable,” said my son, already in love with his brother.

My heart began to warm from a slushy trepidation, I pointed at Zoey alternating staccato barking with the chewing of Larry’s foot.

“Is Bob going to grow up and bark like that?”

“No, I don’t think so. He rarely barks at all,” said Carolyn. “Only one bark when he wants something.”

There was no barking in the beginning, only illness. Shortly after we made it home, he was hospitalized for severe viral gastroenteritis.

Between the years of family life, through my son’s middle school, high school and college years and between illnesses–broken leg from a jump off a couch, herniated disc, cancer, cancer, cancer—all local and removed successfully—Bob gave his one bark.

“Get out of bed already.”

“Give me some left-over chicken.”

Every weekend I took him to Central Park and I chased him off leash from one group of canines to the next like packs of civil beasts in remote jungles and prairies and when I finally got him home, I bathed him with dog and horse shampoo on the body, and Johnson’s Baby Shampoo on the face. I loved the way my wife spoke lovingly to him like an infant when he was finally dry.

Along with his dog walker, Tammy, who evolved from our son’s nanny into the love of Bob’s life, we sculpted one of those family routines that takes on a life of its own, so mundane and permanent until it sadly shatters.

On my way to the eclipse, I pass Cowpens South Carolina, Bob’s place of birth on the very same day he’s died.

A few hours later in Columbia, along the banks of forest and a river in the exact kind of place Bob would love to run through stopping to lick at the leaves and pee on dozens of trees, from behind my eclipse glasses I watch the sun fade behind a shadowing moon.

The air cools and soon the last of the sun’s slivering rays is completely blocked by the totality of the eclipse. With the sky temporarily dark, I share confusion with the crickets and birds and bats. I remove my glasses and stare with tears of joy and sorrow at the great ring around the moon. I stare with wonder at the flaming circle of life. 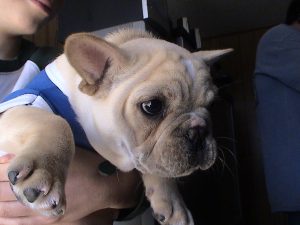 Bob as a pup on way home from South Carolina 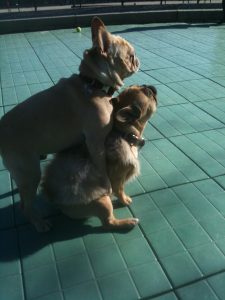 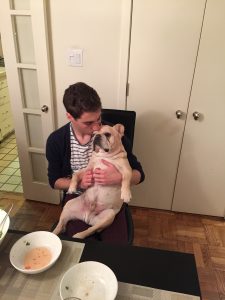 Bob and his brother 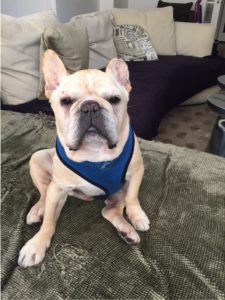 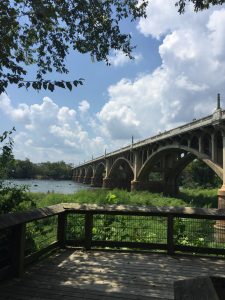 The river in Columbia, SC, site of eclipse viewing 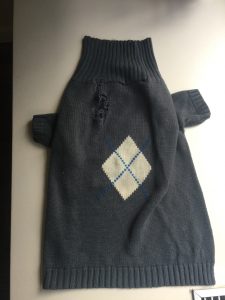