It was Mrs. H. in second grade, who told Sal and Douglas to get behind the bookcase because they weren’t behaving properly.

Unfortunately, she forgot to tell the kids their punishment was over before lunchtime.

About two hours after recess we returned to the class and found the two boys standing behind the bookcase in a hypoglycemic stupor, still atoning for their sins.
Out of either a moral sense of responsibility or the paranoid realization she might be fired, the ordinarily subdued Mrs. H. went scrounging through the classroom to find appropriate food substitutes for the hungry boys. She settled on marshmallow chicks; those small yellow ones left over from the previous month’s Easter party. The same marshmallow chicks piled in the basket next to the fake grass and dyed eggs.

“Here, eat these,” Mrs. H said. And she handed the astonished boys three of the spongy critters each and a few of those milk chocolate eggs—the ones that you have to peel off the painted foil with a white strip that always embeds chocolate under your finger nails, like the flesh you’d find under Mrs. H’s nails if she was mauled by an attacker and later autopsied by a sex crimes unit.

Once the hungry boys wolfed down the last of their sugary snacks and were back in their seats, Mrs. H. wiped a rim of sweat from below the helmet of her crimson coiffure, relieved she’d successfully fulfilled that day’s teaching obligation. No one could fault her for sending those insolent boys home without eating lunch. 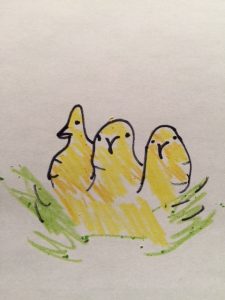