Beware of Gifts From Your New Doctor

An acquaintance of mine recently found a new primary care physician accepting his insurance. He chose the name randomly from the health plan list.

The doctor’s office, he explained was next door to a kind of Mom and Pop jewelry shop.

Both the jewelry shop and the doctor’s office were victimized by frequent thefts, so the doctor had Internet surveillance cameras and the assistant came outside and interviewed the patient while he was sitting in a chair under the blue globe of the security camera. Next, he measured the blood pressure and did a basic exam.

Eventually the doctor came out as well and suggested treatment without ever touching the patient.

The prescription involved a complex compound medical paste that had to be ordered from a specialized pharmacy on the other side of town.

Once the prescription was written, to avoid hard feelings, the patient was invited into the jewelry store to choose a small gift of less than a fifty dollar value displayed on a table.

Choices included straight pins, charms and small rings that might fit a child or dwarf. My friend chose a key chain from Appalachian State University with an inlay of fake diamonds.

The advertisement for the doctor was somewhat misleading. It said:

Free Prize with visit (if you mention this ad)including valuable jewelry from family heirlooms.

No transmission of infection.

The Doctor is always right.

One week after his exam, there was another robbery. The surveillance camera malfunctioned and insurance investigators concluded that it was an inside job.

The jewelry was stolen along with most of the medical equipment.

The doctor blamed my friend for the break in.

The police visited him along with a state health inspector and a member of NASA.

The police told him he was a suspect in the robbery. There were witnesses.

The health inspector told him he might have contracted Tuberculosis.

The member of NASA told him he might have been exposed to a space rash.

“What kind of space rash?” he asked.

“The kind that may be rapidly fatal unless you apply a special compound medical paste. You did apply the paste, didn’t you?”

My friend had not. He changed the subject.

“You said there were witnesses.”

The policeman and his entourage spread apart to reveal a child and a very small astronaut standing behind them. Both wore matching rings.

“Sorry about the TB and the potentially fatal rash,” said the policeman. “Can I see your car keys?” 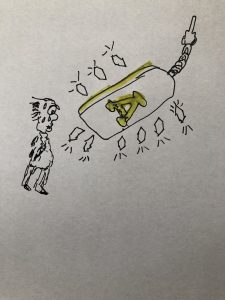 ← I Followed Her An Imperfect Aphrodite →