Memo: To Everyone except Emile

Emile Hates Email. He says this, we suspect, because he never receives any–except for spam, which he downloads and spreads on his sandwiches with a butter knife–like the thick, pasty stuff he ferments in the recycled plastic bags stored at the bottom of his foul refrigerator; bags of congealed fat, grease and gravy, hardening along the edges of old foil trays like footstones memorializing ancient TV dinners. Emile hates email but stores his bags full of old gravy just as you or I might file away messages on our desk tops.

Emile has no social network, no support system of any kind, and comes to work disheveled, smelling of mildewed clothes with an often fecal breath, yet he acts as if all is well, like he’s just another guy in the office—a normal work-horse worker—which he’s not.

We never want to look at his hands because of the gnarled fingernails and greasy hands connected to short arms, priming the spray from the wells of his deep armpits.

We worry that soon our hair will spike like his–antennae along the sides, balding everywhere else, except the hair on his back–and we often wonder about his brain and small ears. Perhaps he has a genetic condition linked to his three chins and spoiled spine and farther down the knees that look like breasts and feet that might be hooves complementing his hoarse voice.

This Emile, “hates email,” and we feel sorry for him–but never sorry enough. We dread arriving with him simultaneously in the garage, or passing him in the corridor. Often we take different routes to avoid his work station on our way to the restroom.

Now he wears a hat, emphasizing the fact he can’t stand email, so, please don’t send him any.

None of us have his number, so don’t bother sending texts. He has a flip phone anyway, and no thumbs–though he’s all thumbs when it comes to discoordination and discombobulation.

Let’s treat Emile kindly. Please don’t draw cartoons of him as I did. 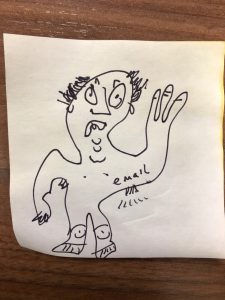 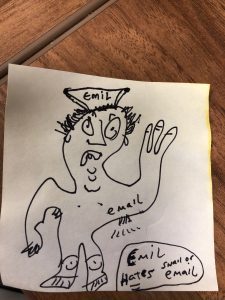 ← My Mother Reminds Me of Anne Frank Paco and I →