One day my mother came home without any meat.

“The butcher store closed,” she said, licking chocolate off the side of an ice cream cone. “But they opened a Baskin-Robbins.

I stared at the irregular texture. Chocolate with lumps and bumps. Tumors of white spongy marshmallow.

An eight-year-old version of myself kicks a rock down the rocky road. Pebbles of silt and moon dust in our small suburban town, waiting for my mother to get home.

Before she switched to Fudge Brownie, my mother always chose Rocky Road.

The world is rock.

Nuts and marshmallows in a road of chocolate.

Those no longer here:

Ice cream was their comfort.

My grandmother always had Breyers in the freezer.

No one chose a rocky road if they had Chocolate Chip.

“Howard Johnson’s had up to twenty-eight flavors” my mother said, “but Baskin has thirty-one.”

I liked German Chocolate Cake because it was similar to Fudge Brownie, but I was fascinated by the Nazis. They killed many of my relatives and Larry Kohn had a Nazi helmet in his basement. His father brought it back from the war and it had the name “Schmidter,” written on a leather strap inside in dark black ink.

On the day he left for the war, Schmidter ate his German chocolate cake after his bratwurst on the terrace of his modest house overlooking the Rhine, only they didn’t call it German Chocolate Cake because he was German, just as the French didn’t call their potatoes French Fries, and little Schmidter ate his chocolate cake before Baskin-Robbins invented ice cream cake. He had one last piece of cake, said farewell to his parents and headed off to the front in the Ardennes only to be torn apart a few days later, by a mortar blast along a rocky road.

Larry Kohn’s dad found the helmet next to Schmidter’s bloodied corpse and brought it home.

If my father wore a helmet, he might not have had a brain hemorrhage after falling out of his wheel chair.

My mother had Rocky Road and I had Banana Berry. My father ate Mango Sherbet and he never had to fight in a war like Schmidter because he had flat feet and was in school studying to be a chemical engineer, breathing in the toxins that would later cause his Parkinson’s Disease.

My father wasn’t a tough guy and never taught me how to box, unlike Schmidter, who learned to poke and jab, because his father looked up to fighters like Max Schmeling. In their first title bout, Schmeling defeated the American Joe Louis, who happened to be a black man. Louis won the rematch a few years later.

Rocky was often the name of a boxer, and maybe Joe Louis would have given Rocky Road a chance if he wasn’t so infatuated with French Vanilla.

My father settled on his Mango Sherbet and I had German Chocolate cake and used to ask Larry Kohn if I could try on the Nazi helmet. Usually he let me, but I can’t remember how I felt when I put it on.

I should have bought one for my father. A helmet. Not a Nazi helmet.

“They opened a Baskin-Robbins,” said my mother. The butcher was gone and the ice cream came in.

And later on a different kind of butcher lopped off her breast.

But she always loved her ice cream.

They used to tell children: ice cream soothes your throat after they cut out your tonsils. But in the hospital they only had three flavors: Vanilla, Chocolate and Strawberry.

No child ever requested Rocky Road. 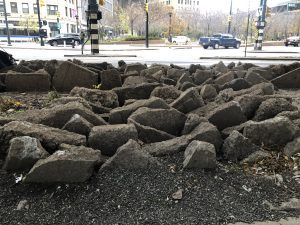