There are people who use their memories

while others don’t care to think.

Who said this? you asked.

You asked how I knew him and I said:

“It has something to do with extracting other people’s thoughts. About digesting the brains of those we love.”

“This is true,” I said. “It reminds me of a tribe from Papua New Guinea. They ate the brains of the dead relatives they loved.

“Corpses of family members were often buried for days, then exhumed once the corpses were colonized by insect larvae, at which point the corpse would be dismembered and served with the larvae as a side dish. Sometimes this resulted in a deadly neurologic disease similar to Mad Cow Disease.”

You believed everything and sometimes you laughed.

But I didn’t’ tell you that in junior high school a classmate and I decided to make a seismograph.

We wanted to capture faultiness in the earth.

Downstairs in his cellar we searched through piles of junk

hoping a seismograph would magically appear.

We showed up at the science fair with nothing.

The judges asked about our seismograph.

“It’s not working,” I said, but they didn’t seem too upset because the student next to us had a more successful project:

a kind of brain transplant.

There was a poster with drawings of needles inserted into the skull of a mouse.

The student taught a mouse new tricks and later extracted this mouse’s brain matter in a syringe.

He injected the first mouse’s brain matter into a second mouse and sure enough, the second mouse was able to perform the new tricks.

I remember being amazed this student didn’t win.

These were my thoughts.

And Kaldon, we decorated his dark face.

You said he was a guy and I,

a hollow plastic head I stole from a colleague’s office.

A brainless bust on an empty shelf

in a sleep lab that wasn’t going to help people

I confuse Kaldon with so many others.

People I want to ignore

as if my mind is emptier than his.

Now he looks out from upon my shelf

teaching us all to remember

thoughts we most want to forget. 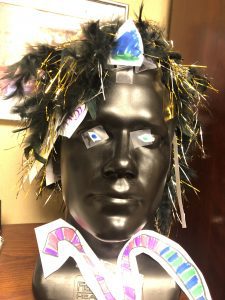