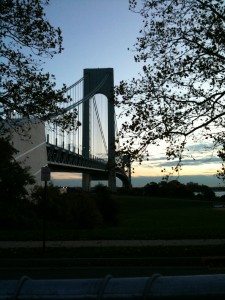 I’ve only done it twice but as a runner and practicing cardiologist, here’s what I suggest.

DISCLAIMER: No one should run a marathon because they think it will make them healthier. Recent literature suggests that less is more when it comes to running and longevity  (http://www.ncbi.nlm.nih.gov/pubmed/25660917 ). You run the NYC Marathon because its cool, an experience of a lifetime, and if you actually do complete it—that’s an amazing achievement.

Right now, you are well-trained and conditioned. For the next seven days, forget that it’s not necessarily “healthy,” to run 26.2 miles. Forget about injuring your joints and being sore for days after. Ignore the descriptions of “cardiac overuse syndromes,” with cardiac muscle damage and accelerated hardening of the arteries. Don’t worry about arrhythmias such as atrial fibrillation and the rare ruptured plaque leading to sudden death. The good news is–the most serious conditions are quite rare. Just don’t push yourself beyond your ability and make sure you’re medically stable to be doing this. You can worry about the long term consequences some other time—hopefully this quest has lead you to a healthier life style, which in the long run will make you way better off than your friends and family eating and drinking on the sidelines.

The Night Before: Maybe the prep should start two or three nights before—get your sleep then! Excessive carb loading is probably unnecessary. Eat what agrees with you not what you think you need to. I would avoid pasta with tomato sauce as this often causes indigestion, heartburn, reflux. Same for garlic sauce.

You need three layers of clothing:

A) Base Layer: the stuff you will run in after you heat up.

B) The warmer layer you may discard along the way including hat, gloves and possibly arm warmers. I suggest a cheap fleece or long sleeved Sport-Tek shirt. A neck warmer is very valuable on the bridge. Most participants seem to run in shorts. Some in loincloths.

C)The Starting-Line layer: This is the old coat you’ve hopefully been saving all those years, waiting to give away until this Sunday. The warmer the better. If you absolutely don’t want to give it up, you have time to leave it in your drop-off bag and get it back at the finish line, but that takes long and may be out of the way. You will also have to give up your finish line bag long before the race starts, and you will chill if you don’t wear some extra layer onto the bridge. If you have friends or family meeting you, let them take the warm recovery stuff to you. Ideally a hat, coat, sweatshirt, sweatpants, warm socks and gloves. You will get a semi-insulated poncho of sorts at the finish line to stop you from freezing to death for at least another hour.

TIME CHECK: Remember Daylight Savings ended. The clocks moved back! The clocks! You have another hour to not sleep and be nervous. Don’t forget your own clock—your sports watch. I suggest take your phone too, switched to AIRPLANE MODE—there will be less distractions and maybe you’ll run faster. Don’t worry about the weight of your phone slowing you down. Did you tape your nipples? Body Glide is better. Apply liberally to toes, balls of feet, heels, neck, under arm, groin. Anywhere that may rub—anywhere you feel you may be rubbed the wrong way, which is constant in the NYC Marathon.

4)Hydration and Nutrition on Race Day: Be very aware of when you’re supposed to start running and how many hours before you are used to eating. Keep your usual pre-race breakfast with you until that time. If you eat at home, you’ll be starving by the time the race begins. There are often donuts and coffee at the start for a lucky few, but who the hell would run after eating that? Consider carrying four small bottles on a weight belt—umm, running belt–like a deep-sea diver. One or two bottles of a protein drink you’ve had before, something similar to MUSCLE MILK or any protein-containing endurance supplement of your choice(best to start drinking this when you would normally need protein and recovery for your aching muscles, usually well into the second half of the race) and two bottles of an electrolyte solution you’ve had before–something loaded with potassium and some sodium. They have sports drinks along the course (check with sponsors) but I suggest you bring your own. I like Zico Coconut Water. You choose the flavor. Make sure you’ve run on this stuff before.

In addition to the fluids you will ideally wear on your belt, I also suggest you bring two bottles of water on race day and whatever you want to drink at breakfast. One bottle of water you can sip as you prepare to get ready to run (you often have to wait for an additional 45 minutes from the time you start heading to the bridge until you actually leave. I suggest carrying one small bottle of water with you at the start because you won’t have any water available for at least a few miles and the first few water stops are very crowded (and slippery). After the first few miles when things calm down a bit, you can chuck the bottle and feel lighter.

You should also bring some gels for carbs, figure one or two an hour and perhaps some electrolyte chews. I also like raisins for later in the race.

Spare the others below you. Miss Liberty is watching. Use the Porta Potty shortly after arrival at base camp and then again in the coral as you prepare to enter the Verrazano Bridge. It seems very crowded before the bridge, but there is enough time for a final toilet run. I don’t remember seeing too many Porta Johns free along the race route except right off the Queensboro Bridge just as you enter Manhattan and are curving around to head onto First Avenue around mile 16. Everyone is so excited about meeting the boisterous crowd they don’t seem to think about using the toilet. This is when your adrenaline kicks in, however, and you may lose your urge. The Flight and Fright response is an amazing thing.

6)HEAD FOR THE TENTS: Pre-race, as soon as you get to your race village at Fort Wadsworth, Staten Island, look for the hospitality tents. They are often hosted by a variety of sponsors such as radio stations. They fill up early. I suggest you run in there and reserve a spot to stay warm. You can ask someone to watch your stuff while you take a quick walk, a photo, and use the restroom. You will meet so many great people from all over the world.

For advice on running the race itself, I refer you to a real athlete: http://www.active.com/running/articles/a-mile-by-mile-look-at-the-new-york-city-marathon

Best of Luck! Enjoy the experience. 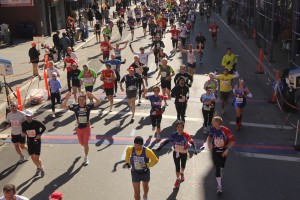 (That’s me, red cap center at mile 13.1 in 2010, one of the only idiots weighted down with all those fluid bottles)

← Are All These Lab Tests Necessary? How We Relate to the World →