Ghosts on a Path

There was a time when I drove to work or did something more daring like skiing down a mountain, I always saw my parents on either side of me–hovering, maybe floating at shoulder level, nodding their silent approval.

They glanced at one another and back down over my shoulders to observe and silently ask one another if this was the path they had chosen for me.

This all started on a small trail from which they cleared the brush. I helped my father garden and tighten the edges and along the way we repaired the walk. We paved the potholes with loose cement in the shorts he took me to buy on a Saturday morning at a sporting goods store, long since out of business. He explained about construction and engineering. He described ways to maintain the patency of the road.

My mother came outside wearing the first short sleeves of spring. She helped with more of the gardening until she left to make us lunch: Grilled cheese for me and grilled cheese with tomato for my father.

As I advanced through the different stages on the path, my parents began to lag behind, but I always slowed at some point to let them catch up because I assumed I needed their approval.

In the beginning this was just a confirmation, but as the path became steeper and more complex, and as the vegetation thickened, the more obscure the destination became. Still even then, I was able to look over my shoulder even if only for a glimpse of them far behind as they slowed to catch their breath.

Sometimes they held each other to stop from falling.

Eventually my parents were very far behind and I had to use objects, lenses of a sort to keep them in my rear-view finder because I was stubborn and never willing to slow down. I needed to forge ahead, so I simply found a more powerful lens.

Now my parents are so far in the distance, we’re forced to communicate in a different kind of language, one involving the mind, but without sound.

This is how I seek my parents’ silent approval: I do whatever I want to do.

I do that on a path I no longer recognize.

A path pocked deep with holes aching to be patched.

A path my father is no longer able to help me fill. 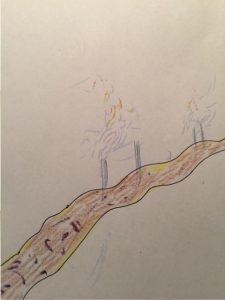 ← She Flails The Distillation of Dad →