The Distillation of Dad

Years before he began to wither and weaken from Parkinsonism, my father told me that after he started working as a chemical engineer, he went to law school for a semester at night.

“I thought I might want to become a lawyer,” he said and described his class on contracts and how he began to learn to think legally.

It was at a respectable school either in Manhattan or Brooklyn. I’m not sure why he never continued. Perhaps I had something to do with it. The pressure of having children at home and working a full-time job must have made a career in law unrealistic.

We never spoke much about this again but I always came across the framed photograph of him smoking a cigarette while studying law. Always placed prominently on the shelf in front of the other old family photos, it was as if that photo distilled the idealized version of how my father saw himself, a handsome intellectual like Clifford Odets at his physical and intellectual peak. Years later, perhaps for the rest of his life, he’d try to recapture that moment.

Essentially, my father was a man of lists and logic. A Stuyvesant and Columbia graduate, he excelled at math, chemistry and physics, and always seemed destined for a career in engineering.

His strength was his intellect, not his physicality. At the young age of five, he tragically lost his father to a ruptured appendix and was raised by a working mother, a loving aunt and uncles, who most certainly played some sports with him until they were off to war in Europe to defend against an enemy that wiped out many of their relatives including the parents of the  young cousin, who miraculously escaped Germany for the safety of Bensonhurst, Brooklyn. For a while, my father shared a bedroom with her.

Fifteen and then twenty years later with the growing demands and expense of a family, law school became a distant memory, but the approach of middle age lead for the first time to daring attempts at physical and artistic pursuits.

My father joined the Y and played paddleball in his hi-top handball shoes. He took guitar lessons strumming moronic nursery songs on the crappy nylon-stringed guitar I later commandeered and restrung to learn the same moronic songs left-handed.

Eventually there was oil painting in the predictable realist style expected from an engineer–images lifted from the pages of National Geographic: landscapes of suns setting over glistening harbors, children frolicking through cobble-stoned villas, ruddy-skinned Eskimo children in parkas; and of course one self-portrait: my father studying law, smoking a cigarette, in some ways resembling Odets.

Odets, a playwright and director, tragically began to die of stomach cancer in his fifties, around the same age my father was forced to retire from work because of advancing Parkinsonism. It’s often said that Odets was “someone who had not lived up to his promise.”

I don’t want to say the same thing about my father. He was a great, intelligent man and I loved him very much. Sometime soon, I expect to begin my own painting. 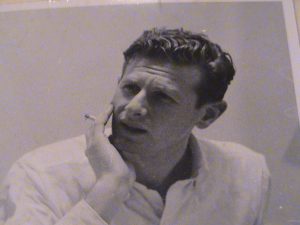 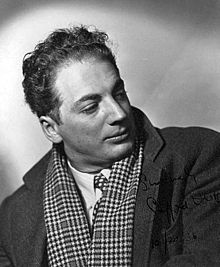 ← Ghosts on a Path Cupid's Arrow: Love Your Heart Month →