It was only fairly recently that I saw the opera, Puccini’s Tosca for the first time. It was in my home town, New York City. 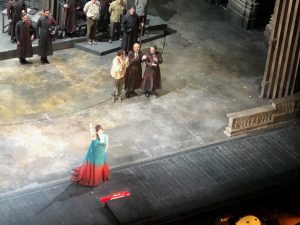 Near the end, Tosca’s lover sings some final words in a moving aria.  Though he knows he’s likely to die, he declares his love for Tosca, the love that made his life worth living.

Soon after, as if part of our own surreal performance, my son and I traveled to Milan, Italy–a last minute trip I arranged for New Year’s 2020.

Who knew the Covid-19 pandemic would sweep through Italy only weeks later and devastate that entire northern, Lombardy region of the country, especially that wonderful city of Milan?

We arrived after a few days of skiing in the French border town of Chamonix, a three hour drive from Milan.

They had warned us that the city streets would be empty during the New Year’s celebration.

“Restaurants will be closed.”

We stayed in an unfashionable business area not far from the central train station. The January weather was seasonably mild and we walked the streets and took the metro. There was certainly enough local restaurants and cafes open.

In the trendy Brera district, we stopped for espressos and had an authentic Milanese lunch. 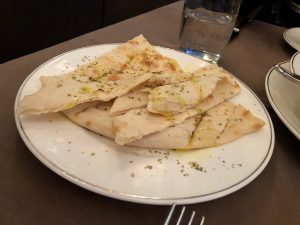 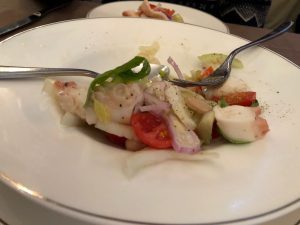 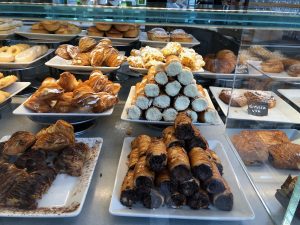 On Via Montenapoleone we window-shopped at all the famous Italian designer stores. 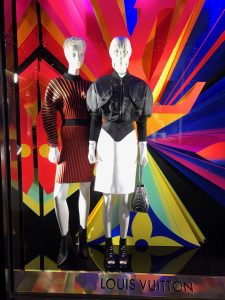 The tourist area around the Duomo was packed with visitors. 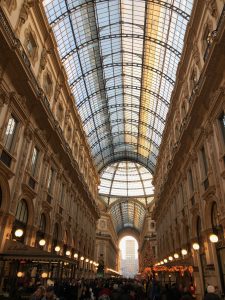 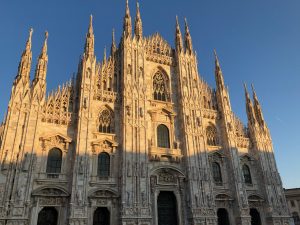 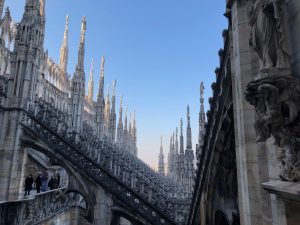 Inside the historic cathedral, for a long time I stared at the statue of Saint Bartholomew (supposedly flayed alive for spreading his gospel) on a pedestal. I couldn’t help making a morbid comparison to the famous Italian designers down the street. 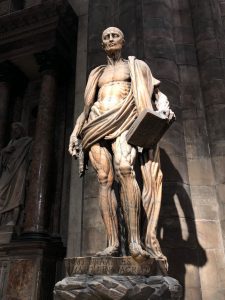 The sculptor d’Agrate accessorized his subject’s strips of skin in marble, but they appeared just as soft as the fabrics from the other nearby designers: Gucci, Versace and Prada. 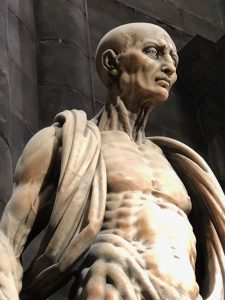 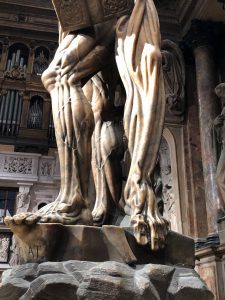 Outside and away from the massive spiritual cathedral, the trollies of Milan seemed to have lives of their own. The metallic structures followed us with a roar, durable like marble, but mobile. Tanks on a track. 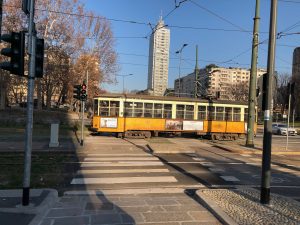 I stopped to video one crossing my path. I continued the video passing a small church. The tint of sky seemed to change its shade as if the heavens were signaling something ominous to come.

Now I look back on that city only a few months after our visit. I look at the Milanese people in my video, crossing the street and they may be no different than the New Yorkers I see crossing the street now. But the video captures a certain sickening innocence, like the calm before a tidal wave. I don’t know how many of those pedestrians have been lost to Covid-19, but it’s clear that since then, everyone’s life has changed.

I think of the ill, clinging to life on ventilators in packed hospitals, just as they soon were in New York City. In too many places. The survivors cut off, isolating in small apartments.

At the time of our visit, I didn’t know much about social distancing, but I thought I knew about marble and cloth. Cloth wore out. Marble lasted for centuries.

You could see it in the flesh, in the blood flowing through the veins of d’Agrate’s statue. The soft fillet of his own skin is thrown over his shoulder like a scarf—a scarf preserved in marble, so different from the designer outfits displayed in showcases down the street, outfits coming in and out of style.

Cosmopolitan cities of fashion, with a seeming but false sense of permanence.

Even marble wears over time.

In statues and tombstones.

Before we came home, as if fate was offering a final chance, as if the city of Milan was offering us a bittersweet farewell, we had the opportunity to see an Opera at La Scala, the birthplace of famous Italian Opera.

Of course it was Tosca. 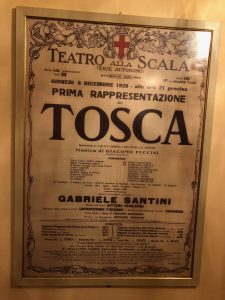 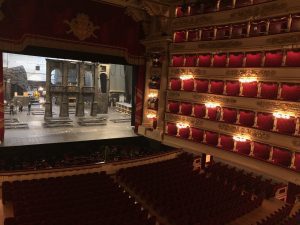 I didn’t know what was coming in the following weeks, no one did, but this time, the aria: E Lucevan le stelle, brought me to tears. 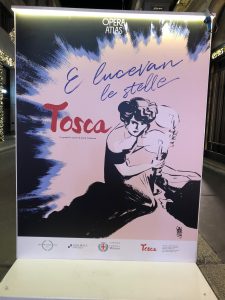 You can see Pavarotti singing this in one of his most moving performances ever.

“The stars were shining…”

“And I die in desperation.”

“And I never before loved life so much.”

or visit my media/moving images)