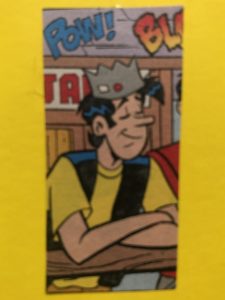 I try to envision this entire scenario, the scenario of the pandemic as something much lighter, like a short scene from a comic book.

It’s a short, light read. Something not even entertaining, and when we are finished, we can tear it up, and throw it out in a bundle with the other yellowing newspapers—the ones piling up because they are either too depressing or too difficult to believe.

We can throw out the pulpy fiction in a heap to be recycled, or composted. We can incinerate it.

Why am I so afraid to read it?

It’s an Archie Comic, the kind I bought at the candy store when I was a kid for a quarter, and the main character, the evil villain is nothing more than this skinny ridiculous character that nobody ever paid attention to. He was never a star, only a sidekick of sorts.

He’s Jughead, the hungry skinny kid, who for no good reason, always wears that paper crown. That kid with a really annoying sense of humor.

That annoying kid who never seems to have enough to eat, always plotting ways to finagle another burger, one more slice of pizza, the first to leech a car ride, or borrow five bucks. The kind of kid who would someday commandeer another cell’s machinery to make more copies of himself. 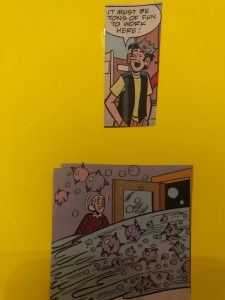 The kid is a living virus, not even made of DNA. Not that a virus has a conscience, but he just can’t shut up and he overwhelms everyone so much that you can’t really show it in graphic form. We are simply inundated. 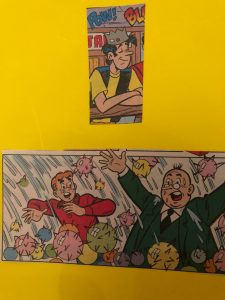 In comic books you are allowed to fast forward way past the improbable.

Somehow the hero always steps in, only this time the hero is like every living human being except for that kid, everyone that stood up to him, not even realizing he was a bully in the first place.

What I try to capture is the feeling we get when we turn to that last page and we can ditch the crappy comic book forever. 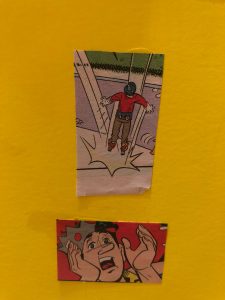 (Please listen to the dramatized, musical version of this tale on SoundCloud)https://soundcloud.com/user-279788833/jughead