In The Odyssey Homer describes Odysseus entering the underworld, where he meets the spirit of his mother. She’s quite shocked, disheartened to see him.

how could you cross alive into this gloom

at the world’s end?—No sight for living eyes;

And in the Hades chapter of Ulysses, Joyce’s protagonist, Leopold Bloom attends the funeral of Patrick Dignam on June 16, 1904.

Now I visit the underworld from an abandoned parking lot a few blocks from my office to pay respects to Shirley, the vivacious mother of a close friend. A young 82, Shirley was a dynamo–still in her prime–a beloved mother, grandmother, great-grandmother, who died like so many others after she was infected with SARS-CoV-2.

I visit Hades(via ZOOM funeral) adjacent to train tracks that may not go down, but they go east to west. Between trains, I listen to the birds and on my smart phone to the service for Shirley. There’s an insightful eulogy from her Grandson about her unconventional life and death, and sadly—funeral. There are touching words from one child and a haunting farewell song from another. I’m thankful to be alone, not in a carriage full of men, meandering through Dublin streets on June 16(known in literary circles as “Bloomsday.”)

Already, Bloomsday has passed. Actual summer is about to commence, and although Shirley has been gone only a few months, by now, so many others have also departed.

Time runs still. The air is thick. Summer comes, and we continue to adorn ourselves with masks.

This is the trip to the underworld that Odysseus took, that Bloom took.

On my way back from the parking lot after Shirley’s ZOOM funeral, in the distance I see the hospital from which Covid-19 patients have departed–many alone—for mournful journeys to the underworld; their loved ones condemned to forever imagine a final, tearful farewell–like Odysseus.

rising perplexed with longing to embrace her,

and tried three times, putting my arms around her,

but she went sifting through my hands, impalpable

Now this embittered all the pain I bore

And I cried in the darkness:

will you not stay, be still, here in my arms,

may we not, in this place of Death, as well,

hold one another, touch with love, and taste 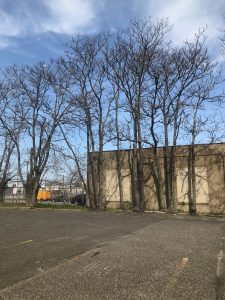