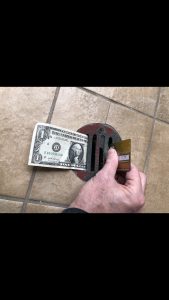 I’m confronted by the FBI. They’re after me and the president. We seem to be the last ones left and now it’s up to me to turn the president in or let him go.

This all takes place in an apartment of sorts, a building where in normal days there would be a party, one of those business gatherings where alliances are made and the top business people in the world–or at least the wannabes–trade secrets while plotting for wealth and power.

The bottom line is that the president has been stripped of everything except the joint account I share with him. Now it’s up to me. I can deny that any of the money is his, and if I do so, he’s a done man. Outside there are officers waiting to arrest him.

All I have to do is take the last million dollars out of our bank account and hand it over to the authorities. It’s only one withdrawal that they’re all waiting for and then the saga will be over.

I have the bank card in my hand. The FBI agents glance at me and say “make the withdrawal,” and I feel the pressure immediately, because the president is still in the room with us.

The president looks up at me it’s hard to interpret his expression at this point, to discern how he’s actually feeling because we’re so far in, and now, it’s close to the end. It’s almost as if he’s given up–but not quite.

“Just do the right thing,” he says.

And the president looks at me with that look that says “I know that you know what you have to do. Just do the right thing. I’m the president. Everyone is depending on you.”

The FBI take me to the bank machine and wait for me to plug in the card and type in the same passcode I’ve used all these years. They wait for me to withdraw all the money left in our joint account and hand it over so that the president will have nothing left.

He’ll be a spent man.

And I know what the president is thinking. He’s thinking I’m going to take out like a dollar and leave the rest of his account intact in the account we share because we’re both part of this sinister plot. You can only withdraw money once and if I take out only a dollar the president will have whatever is left to make his escape and to continue with his plan of action.

But first and foremost, it’s hard to find an ATM that works. They’re located in various corners of the apartment throughout this cavernous living room as large as a casino. It overlooks the city from a very high vantage point with people in this giant living space still partying and going about their business as usual. But I’m surrounded by the Secret Service and the FBI and they bring me over to the next ATM and I slide my card in, but this one doesn’t seem to work either and so I go to another less conventional bank machine and the president sits across the other side of the room and he stares at me and I’m thinking that all I have to do is take out the million dollars and it’s over and meanwhile the bank machine just takes so damn long it’s not even the normal kind it’s as if they’ve taken off the front of the machine and I see the inner workings of this great cash machine, gears and all, and the card slides in the middle of some rollers and I try to fit the card into the gears without a card reader because that’s been removed and there are springs and things that hold the card and I’m not even sure I’m doing it right.

I think to myself,  wow if none of the ATMs work, it kind of takes the pressure off. I don’t want to have this come down to my decision. I don’t want to be responsible to make the final call that’s going to determine the future of our country. I mean whether or not the president is arrested or whether or not he can escape it shouldn’t be up to me. Who advised me to make such a decision? And why am I involved in  the first place? I’m just another typical American, an American nobody with no power or wealth and if I have a joint account with the president it’s only because I was hired to safeguard it. It’s not really mine. It’s just part of my job.

And as I type in my account and as the machine comes to life I realize you can’t take out a million dollars from a bank machine. You can only take out what? Five hundred? Maybe a thousand at the most which means it’s not going to be up to me to make that decision. I can take out a dollar or I can withdraw the maximum but it’s not going be enough to empty the account and so the pressure is off because I no longer have to be the one responsible, and the FBI should realize that by now.

I think they just want to see how I’m going to react. Am I willing to at least try to withdraw a million dollars?

It’s all a game. The FBI are testing me and so is the president.

I can’t recall how it ends because no one has to see my withdrawal anyway, but soon enough I’m in another room in the house where they have a kind of crappy fake amusement park of sorts and they tell me I still own a piece of it, you know, because I’m an American, and I’m thinking I’m supposed to invest in at least one boat, a great boat that takes you on a ride through this fun house of sorts, a fun house that kind of represents where this country has been going: through a cave, like a tunnel of love in a dark place where things light up and artificial signs pop out to entertain you and scare you at the same time, but you’re willing to sit through it no matter what because you’re so starved for entertainment and you don’t know what else to do, and all alongside you are these boats with families sitting inside with kids and friends and we’re all supposed to be entertained because it’s designed as a joyride, but it’s constructed in such a poor way that it does none of those things.

I don’t know how long it takes me to realize that this ride is fake—that it’s not even a good imitation of a high-quality carnival ride.

But I try to be a good sport and I sit on the side and wait for the boat to approach and when it does, I see it’s only a paper boat that fits through a small space made of tissue paper and I’m glad that I wasn’t foolish enough to be sitting on it. I’m relieved I never actually ended up investing in this park in the first place.

And somewhere across from me, sitting by himself around a small lonely countertop table, I see the president waiting for people to decide what will become of him.

The president sits there alone, no longer interested, no longer praising the value of this tissue paper amusement park.