Animals on a Bridge

(more dreams from an NYC writer, inspired by the pandemic)

It’s night time and I’m driving my family. The children are young. I know this road.

The two right lanes turn off to the bridge.

The river is dark and fierce at night.

A large tractor-trailer in front of us carries a crane so I decide to go around him and take a third, unfamiliar lane that also appears to turn off to the bridge.

My lane narrows and as I approach the toll, I see there’s an obstruction ahead, what looks like small animals–a herd of deer resting on the asphalt.

Young animals obstruct the lane as if in protest.

I creep closer because it’s late and we have to pass. We need to take the bridge to get home.

My sister is also in the car. She loves animals more than anyone.

The larger animal in the group stands to protect them, perhaps the mother. She may not be an animal at all. Perhaps she’s human, protecting her herd of vulnerable individuals like Mother Nature.

She seems kind of obese with swollen legs and torn sneakers and doesn’t want to let us pass. The young animals around her are sleeping.

But we need to move on, so I creep closer, the small animals now illuminated by my hi-beam light and they begin to emerge from behind their protector.

“Definitely not deer,” my wife says. “Their legs are too short.”

They peek out at us, simultaneously ugly and quite cute.

Some of the small animals wander onto the road. The most daring happens to be a cat.

The cat struts out in front of the group and she makes her way off the road and onto the perilous rocks and as the cat looks into the darkness of the angry river and then across to the twinkling skylights of the city, for the first time she senses the danger of the entire situation: being out there, exposed, away from the protection of the group.

And I think it’s not going to portend well for this group of vulnerable animals trying to live their lives in the city at night on the edge of the bridge with the endless barrage of traffic.

This mother, this protector can only do so much, I mean how can she possibly keep her group together when the smallest individuals wander out in front of cars or onto those perilous rocks?

Not all drivers will be as patient as I am.

But I have to care for my own family first and we need to take this bridge to get home so I continue to creep slowly and the animals let us pass.

As soon as I pull onto the bridge our lane narrows and it’s obvious this is not a proper lane at all.

Suddenly I’m driving onto wooden planks, not an actual bridge, only something partially constructed and it continues to narrow and soon it’s obvious we’re going to be stuck, suspended over a half-completed bridge and I can’t turn around or back up because the wheels are totally off the road and now it’s as dangerous for us as it was for the small group of homeless animals I mercilessly passed only moments before.

And soon enough, I know I’m going to be as nervous as the cat. 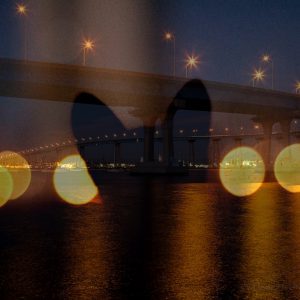 ← Visited at Home Sol and Ida, The Chief and I →