A Strange Kind of Swim

It’s time to swim but the class is held in a substitute pool.

One of those pools with a plastic liner.  It feels artificial. Too urban like we’re in some crowded city with cast-iron dividers between swim lanes, the paint chipping. It’s a bit rusty.

The team swarms into our usual lanes but many of the people swimming among us are strangers. Perhaps this is a public pool and we’re trying to have our class during public swimming hours. But you have to make do if you want to swim. You always have to stick with the class.

I try my best with my cap and goggles to swim but I keep slamming my hand onto the plastic bottom. The water is shallow, less than two feet deep.

How can we swim in two feet of water? Or with such narrow lanes separated by painful rusty wrought iron dividers.

After a lap or two I stop.

I plan to try again later when it’s less crowded.

The coach yells. “Get back in there. Finish the work out!”

I don’t plan on coming back. But when I’m out in the street I realize there’s nothing else to do. It’s dark. It’s late. It’s cold, and my only solace is swim class.

Perhaps I can cross train, but instead I cross train tracks, and as I do, I think about how ironic it would be if I was taken out by a speeding train–just wiped away as I stepped over the tracks. Forever, people would think I left swim class to take my own life all because I didn’t want to swim in a crowded pool with shallow water and wrought iron dividers.

Now it makes sense to go back and try to swim again. To prove to myself and to others: I can handle this adversity.

Back at the pool there’s a good eight minutes left—enough time for quite a few laps, so I try to make the best of it.

A woman I don’t recognize at the front of the pool, either a lifeguard or administrator, tries to stop me.

“You don’t  understand,” I say. “This is my swim class and there are only eight minutes left.”

I can make out my coach and classmates in my peripheral vision. Time is running out. I need to swim. Just a few more minutes.

I ignore her and head into the pool.

But I don’t stop, and when I step into the pool, I realize it’s empty. Drained of all water.

I see the administrator roll her eyes. The coach waves to me. 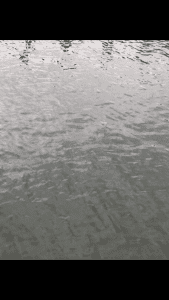