You can clearly see her in the surveillance footage.

The small and tasteful sterling silver earrings one of my girlfriends might have worn in college.

She’s at the controls like a DJ just getting comfortable at the console,

eases up the volume—the bass and whatever the other dial is.

The one that really does the damage.

It starts with just a little rumbling.

Reminds me of the Stanley Milgram experiments, when the innocent bystander

administers shocks to strangers on the other side of a glass panel.

Obedience to authority they called it.

She dials up and the quaking begins.

You see it start to rattle around her.

There’s concentration on her tight lips like a performer used to loud music. No signs of distress.

You feel the damage before you see it,

the sense of faint distant screeching

all mixed in with the music.

Are those screams? So hard to tell with the sound so loud.

Of course the other cameras capture the mayhem. All of it.

The collapsing walls and floors.

The buildings turning into themselves.

Every time she dials clockwise

maybe the hint of a smile

though she resists any display of discomfort

like trying to smile when you’re being shocked–cattle prodded.

Until there’s a slight wince.

You kind of see it when she turns the dial higher,

well past 8 on the Richter scale.

It’s interesting these exceptional people, the ones who somehow avoid damage to themselves

All blessed with the strangest kind of resistance.

When the time seems right she turns it high enough past 9.5.

and you can actually see her shaking.

It’s even hard for her to hold it all together so she does this only for the briefest of moments,

turns it back down and all is quiet,

except for the muffled cries from those buried under layers of debris.

Muffled cries from victims becoming accustomed to their new crypts.

The set over she still stands at the console

until the light fades

and she casually walks from the camera.

another blonde woman arrives at the console.

Less confident, likely from the other side, her attire not quite as tasteful.

She seems more of a warm-up DJ. It’s interesting she comes last.

She turns the dial in the other direction

trying to turn back time

as if she wants to take us back to yesterday

before all of this happened.

She turns the dial in the other direction but 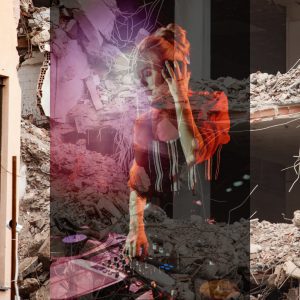