ALCAPA diagnosed by an Alpaca

Al and Ali Packer and their son Sacker Packer were invited to a wedding.

Ali Packer was an  over-packer, filling her suitcase with so much clothing Al had to sit down to force it closed.

There wasn’t enough time for Sacker Packer to have the wisdom tooth removed before the wedding. The dentist gave him an antibiotic and told him to hope for the best.

“Sacker should return as soon as possible to have the tooth extracted,” he reminded them.

The wedding was a beautiful affair in the Catskills.

The ceremony took place between a pond and a meadow in a large open space with Alpacas roaming around to meet the guests and take photos with the bride.

Shortly after Sacker Packer pet the alpaca he had chest pain. At first everyone thought it was the wisdom tooth.

“Why would a wisdom tooth give him chest pain?” asked Ali Packer the over-packer.

“The alpaca was so cute,” said Sacker Packer, “I pet him until he spit at me and then I felt a twinge of chest pain.”

“Yes. I’ve had this before, but this time it was worse than usual.”

“Why didn’t you tell us you were having chest pain?” asked Al Packer, suddenly very concerned. “This is the first time I’ve heard of such a thing.

“It’s no big deal,” said Sacker Packer, but it was a big deal.

“Something is definitely wrong with his heart,” said Dr. Acker. “His left ventricle is large and weak.”

Little did anyone know that Sacker Packer had a dangerous condition called ALCAPA.

“I guess the chest pain is not from the impacka,” said Al Packer.

“What the hell is that?”

“His heart artery comes from the wrong blood vessel, carrying unoxygenated blood to his heart,” said Dr. Acker. “It’s called Anomalous Left Coronary Artery from the Pulmonary Artery, abbreviated as ALCAPA, and it will be fatal if untreated.”

It was Zack Acker who diagnosed Sacker Packer with ALCAPA after he was spit on by the alpaca.

“What is the treatment for this condition?” asked Ali Packer.

“He needs open heart surgery. A bypass operation to correct the abnormal connection of his coronary artery.”

“It’s very serious,” said Dr. Acker, “but I think we caught it in time. He should do fine,”

The Packers were thankful.

Weeks later, after Sacker Packer recovered from the open heart surgery to treat his congenital heart problem, some of the guests made light of the situation.

“Because Al and Ali Packer, the over-packer’s son Sacker with his impacka pet an alpaca he was diagnosed with ALCAPA by Zack Acker.”

Over the next six months, Sacker Packer’s left ventricle improved. His chest pain was gone and his risk of dying suddenly was markedly reduced.

Everyone agreed, the wedding and possibly the alpaca saved Sacker Packer’s life. 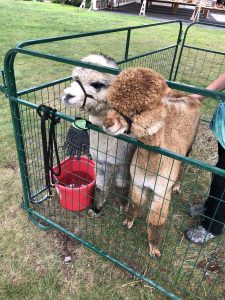 ← The Saddest Park Dreams from the Pandemic: A Weird Paralympics →