Just as veins drain from the gut and visceral organs and connect en-route to the liver, I squeeze through my own portal.

There’s space and time, a musty crack in the plasterboard behind a friend’s oil burner; you twist and turn to get through there, like something out of a Stephen King novel. I do it for the liver.

The liver supports us, no one can function without her.

I’m back in 1967 on an ordinary Sunday, just long enough for a short stroll on the way to the Bronx zoo.

I visit myself and tease my cute little sister. I make my mother laugh disguised as a Good Humor guy. Which is really me, wearing a white Tee shirt that says “Good Humor,” scrawled with an El Marco, before Sharpies were the dominant marker. I carry a cooler with a few creamsicles, an eclair and fudgsicles.

My father is away, near a kiosk, trying to find a restroom and film for the camera.

My mother looks much younger than I ever remembered her. What is she 29? She eyes me suspiciously, but in that same light and playful way when she served her god awful meatloaf. “Are you really Good Humor?”

“That’s not a Good Humor uniform. It looks like Richard’s handwriting on a tee shirt.”

I can’t tell her that the real reason I’m here is to stop the guy behind her from eating in the Bronx Zoo snack bar, because that’s where he gets infected with hepatitis, and develops liver failure and later dies. Without him there’s going to be a plane crash and over two hundred more people will die, and so giving him the Eclair is more important than seeing my family.

My mother buys a creamsicle for my sister.

“Richard, you want one too?”

“Do they have chocolate eclair?” I ask, and it’s frustrating because I have no control of my younger self.

I seem like such an annoying kid. “Just eat the fudgsicle,” I say. “You’ll be okay. Someday you’ll thank me for it.”

“Take a picture of us before we get all sticky,” my mother says. “I think there’s one picture left.”

She gives me the camera, clunky and old with a leather case and strap attached.

“Hold this for me,” I say to my younger self, and hand over my i-Phone.

A few minutes after changing history, I squeeze back past the boiler. 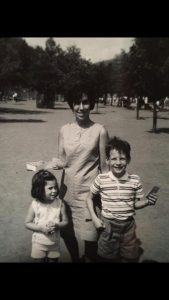 ← I Was a Boy Who Played With Dolls Lip Balm →